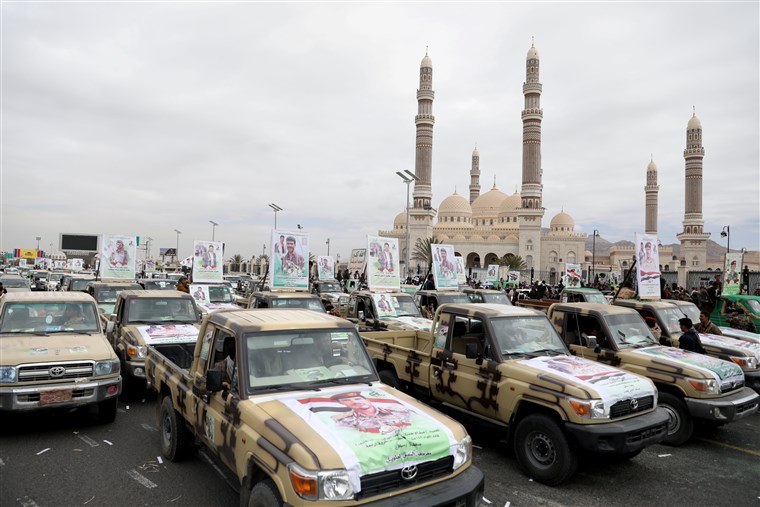 Trump administration officials are locked in an internal debate about whether to label Houthi rebels in  Yemen as a terrorist organization, as aid groups and U.N. officials warn that the move could trigger a humanitarian disaster in a country that has now spent five years at war, four people familiar with the discussions told NBC News.

Officials at USAID and at the State Department have in recent days pushed back against Secretary Mike Pompeo’s plan to designate the Iranian-backed Houthi forces in Yemen as a foreign terrorist organization, arguing it could severely disrupt the delivery of food and other emergency aid to a country already teetering on the brink of famine, a senior administration official, a former state department official, a congressional aide and a member of an international humanitarian aid organization said. The sources spoke on condition of anonymity as they were not authorized to speak to the media.

New data  released by the United Nations last week showed 17,000 people are facing famine-like conditions in Yemen, providing a grim backdrop to the debate. Some 47,000 more are expected to reach similar levels by the middle of 2021.

USAID has drafted a detailed analysis of the possible damaging impact of the move, a congressional aide said, and the agency’s chief John Barsa personally appealed to Pompeo this week not to carry out the decision according to a former State Department Official briefed on the meeting.

Assistant Secretary of State for Near Eastern Affairs David Schenker flew to the region this week and was due to hold talks in Oman and Saudi Arabia. A Senior Administration Official, a former State Department official and a global humanitarian aid worker briefed on the discussions said Schenker was exploring possible alternatives to designating the Houthis as terrorists, including blacklisting individual leaders or key figures in the group. Both Barsa and Schenker were brought into their positions by the Trump Administration.

“At every level below Pompeo in the State Department people are making every effort to either slow this down or at least ensure that it is not an FTO [foreign terrorist organization] designation,” the former State Department Official said. “We now see actual political appointees who are Iran hawks but understand ‘Oh wait, this is really damaging.’”

It is unclear whether Secretary Pompeo will be moved by the appeals. Supporters view the designation of the Tehran-backed Yemeni rebels as part of the U.S.' “maximum pressure” campaign against Iran and a departing blow to Iranian influence in the middle east and  expected efforts by the future Biden administration to re-enter a nuclear agreement.

The Saudis and Yemen’s government-in-exile have asked Washington repeatedly to label the Houthi rebels as terrorists under U.S. law.

The terrorist designation would subject aid workers or groups who have any transaction with the Houthis, including paying fees at ports receiving aid shipments, to financial sanctions and potential criminal prosecution.

The United Nations, the head of the World Food Program, the European Union, lawmakers from both parties and aid organizations have warned that labeling the Houthis as terrorists will have devastating and far-reaching effects on humanitarian efforts.

Yemen is 90 percent dependent on food imports and the potential confusion around the designation would not only be a blow to the economy but the ability to procure food from the outside, Amanda Catanzano, Senior Director for Policy and Advocacy at the  International Rescue Committee told NBC News in an interview. Remittances or money sent from family members or friends overseas, which Yemenis often rely upon, would also be severely curtailed.Recommended

“24 million Yemenis need humanitarian assistance to survive and all of the systems around them have been decimated. It's critical both for political and humanitarian reasons to find a way to end this conflict, and a designation seems destined to prolong it.” Catanzano said. The IRC has been providing humanitarian aid in Yemen since 2012.

Aid groups cite the example of Somalia, where the United States designated al-Shabab as a terrorist organization. The decision complicated aid efforts as the group controlled large swathes of territory. It took months for the aid organizations to secure legal permission from the U.S. government to operate in Somalia, and by that time, a famine broke out that claimed the lives of more than a quarter of a million Somalis.

Unlike with al-Shabab, the Houthis control government ministries and infrastructure in Yemen, including the main airport and ports. That could make it virtually impossible for aid groups to do their work without running afoul of U.S. sanctions.

Malnutrition threatens thousands of children in Yemen. This is the plight of two of them.

Critics say the move could undermine any diplomatic effort to broker peace talks, as a U.N. official or other international envoy could face possible legal prosecution for interacting with the Houthis.

Oman's foreign minister, Sayyid Badr bin Hamad bin Hamoud Al Busaidi, confirmed Saturday that the designation had been raised in his discussions with Assistant Secretary Schenker and questioned the impact it would have on reviving the talks between the Houthis who hold control over much of the country including the capital of Sanaa and the ousted Yemeni government.

“I think we all agree we want to bring an end to that conflict and we all agree that there is no military solution,” the Omani foreign minister said at  a summit in Bahrain. “I do not think there is a solution based on classifying or blockading one key player in that conflict and not bring them, again, to the negotiating table.”

“This designation would further destabilize the country, which is already the home of Al Qaeda in the Arabian Peninsula, make it harder to negotiate a peace agreement, and stop the important work of the many NGOs providing lifesaving assistance in the country,” Republican Sen. Todd Young of Indiana and Democratic Sens. Murphy and Coons warned in a joint  statement.

"Creating new, additional obstacles to the delivery of food and medical aid — during a global pandemic — is not in the best interest of the United States, our regional allies and partners, or the people of Yemen.